Two bits of news have jumped out at me over the past 48 hours – the death of peace activist Brian Haw (http://www.politics.co.uk/comment-analysis/2011/06/20/brian-haw-the-ultimate-protester or any number of other news sites) and a missive from the Daily Express (http://www.express.co.uk/ourpaper/view/2011-06-20) about the lack of summer holidays that will be abound this year. The two items neatly bookend the past decade for me.

Ten years ago I was a raw recruit into the (un)glamourous,   paid world of journalism. In actual fact this was just before I started an to earn the princely sum of £10,500 in  my first reporter’s role. I was in the enviable position of having forked out some £5,000 to learn my trade.

One of the first assignments was a  trip to the big city where we were to wander the streets searching for scoops. We started off with a trip round the Houses of Parliament. As that ended we were told to head out in to the mean streets of London Town and not come back until we had two top quality stories – before being reminded that the coach was due to depart at 5pm sharp. As a journalist you are always up against deadlines. 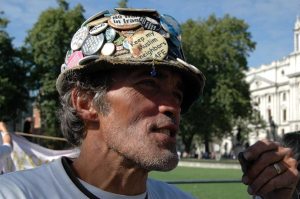 Brian Haw during his decade-long protest.

So as my fellow trainee hacks made their way into central London to track down the latest news, I crossed the road to Parliament Square and asked the chap in the hat and tent if I could have a word or two. I told him I was a journalist and he said I was the first to journalist to talk to him since he’d arrived. A coup for me and presumably he hoped it would get him some much needed publicity – unfortunately my assignment was  read by precisely one person, my tutor.

Nevertheless we chatted about what he was doing and why he was doing it. (Camping and protesting for peace in the Middle East, in case you were wondering). He also told me about his family – a wife and seven children – whom he had left in Worcestershire to embark on his campaign (he was divorced in 2003). And when I asked how long he would be living in his tent on the doorstep of Parliament he told me “as long as it takes”. I doubt he expected it to take the rest of his life.

And in other news… This year we are a no longer going on vacation. Even staycations (http://en.wikipedia.org/wiki/Staycation) are out according to the Daily Express as the Squeezed Middle continues to be squeezed. Yes, next to important breaking news about the marital status of ‘Friend’ Jennifer Aniston, The Express reveals that some 18 million people can not afford a holiday – that’s a third of us (more if you include the inevitable children who cannot swan off to the Algarve without an accompanying adult).

This news is relevant in my household because our own holiday is very much touch and go. And if it is ‘go’, then it is very much going to be in a tent and in this country. A family wedding means we will probably be able to tag on four days in the Lake District, surviving off bread and sniffit if we are lucky.

From a first interview to a (possibly) last holiday in the space of a decade – it’s at times like this I wish I’d invested more of the £200 a week pay check from my first job.

2 thoughts on “Read all about it…”